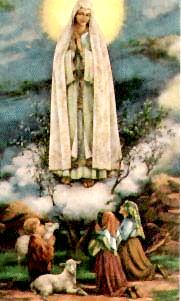 The Message of Fatima

In preparation for the apparitions of Our Lady, an angel who called himself the angel of Portugal first spoke to the children saying: "Don't be afraid. I am the Angel of Peace. Pray with me." He then knelt on the ground, bending forward until his forehead touched it, and prayed: "My God, I believe, I adore, and I love You! I beg pardon of You for those who do not believe, do not adore, do not hope and do not love You!" He said this prayer three times. When he stood he then said to the children: "Pray thus. The hearts of Jesus and Mary are attentive to the voice of your supplications." He left the children who then began to say this prayer frequently.

In the final apparition of the angel, He brought a chalice which he suspended in the air, above it there was a Host. Drops of blood were falling from the host into the chalice. Before offering the Host to Lucia, the only one who had received First Communion, he prostrated himself on the ground and said:

"Most Holy Trinity, Father, Son, Holy Spirit, I adore You profoundly and offer You the most Precious Body, Blood, Soul and Divinity of Jesus Christ, present in all the tabernacles of the earth, in reparation for the outrages, sacrileges, and indifference with which He Himself is offended. And through the infinite merits of His Most Sacred Heart and of the Immaculate Heart of Mary, I beg of You the conversion of poor sinners."

He repeated this prayer three times and then rising up, lifted the Host and looking at it he said: "Take and drink the Body and the Blood of Jesus Christ, horribly insulted by ungrateful men. Make reparation for their crimes and console your God."

The first apparition of Our Lady occurred on  May 13th , Our Lady appeared floating on a cloud, surrounded by bright light and holding a Rosary.

Lucia asked the Lady where she came from, to which she answered,

After this, Lucia asked the Lady what she wanted of them. The Lady replied,

"I come to ask you to come here for six months in succession, on the thirteenth day at this same hour. Then I will tell you who I am, and what I want. And afterwards I will return here a seventh time."

Lucia asked if she would go to heaven, and the Lady responded,

She then asked if Jacinta and Francisco would go to heaven also. The Lady responded,

"Also. But Francisco will have to say many Rosaries!"

Then Lucia asked about two girls who had died recently, the Lady spoke again,

"Do you wish to offer yourselves to God, to endure all the suffering that He may please to send you, as an act of reparation for the sins by which He is offended, and to ask for the conversion of sinners?"

The children replied, "Yes, we do." The Lady then told them that they would have to suffer much, but that God's grace would be their comfort.

In the apparition of July Our Lady said the children:

"Sacrifice yourselves for sinners, and repeat often, especially whenever you make a sacrifice for them: 'O Jesus, it is for love of You, for the conversion of sinners and in reparation for the sins committed against the Immaculate Heart of Mary"

She also confided them with three very important secrets which they were to keep until further notice, she also predicted to give a great sign on the future apparition on October.

"When you pray the Rosary, say after each mystery: 'O my Jesus, forgive us, save us from the fire of Hell. Lead all souls to Heaven, especially those in most need of your Mercy"

On October 13, 1917, Our Lady appeared to the children, there were gathered about 70.000 people who witness incredible phenomena with the sun.

Our Lady revealed herself as " Our Lady of the Rosary."

At one o'clock in the afternoon, midday by the sun, the rain stopped. The sky, pearly grey in colour, illuminated the vast arid landscape with a strange light. The sun had a transparent gauzy veil so that eyes could easily be fixed upon it. The grey mother-of-pearl tone turned into a sheet of silver which broke up as the clouds were torn apart and the silver sun, enveloped in the same gauzy grey light, was seen to whirl and turn in the circle of broken clouds. A cry went up from every mouth and people fell on their knees on the muddy ground. The light turned a beautiful blue as if it had come through the stained-glass windows of a cathedral and spread itself over the people who knelt with outstretched hands. The blue faded slowly and then the light seemed to pass through yellow glass. Yellow stains fell against white handkerchiefs, against the dark skirts of women. They were reported on the trees, on the stones and on the sierra. People wept and prayed with uncovered heads in the presence of the miracle they had awaited.

Another major Lisbon newspaper, O Seculo, sent its editor, Avelino de Almeida to the apparitions site. He came prepared to ridiculed the apparitions, however this is what he reported:

From the road, where the vehicles were parked and where hundred of people who had not dared to brave the mud were congregated, one could see the immense multitude turn toward the sun, which appeared free from clouds and in its zenith. It looked like a plaque of dull silver and it was possible to look at it without the least discomfort. It might have been an eclipse which was taking place. But at that moment a great shout went up and one could hear the spectators nearest at hand shouting:

" A miracle! A miracle!" Before the astonished eyes of the crowd, whose aspect was Biblical as they stood bareheaded, eagerly searching the sky, the sun trembled, made sudden incredible movements outside any cosmic laws - the sun "danced" according to the typical expression of the people.

This was not the sparkling of a heavenly body, for it spun round on itself in a mad whirl, when suddenly a clamour was heard from all the people. The sun, whirling, seemed to loosen itself from the firmament and advance threateningly upon the earth as if to crush us with its huge fiery weight. The sensation during these moments was terrible.

Thirteen years later, after rigorous examination  the Catholic Church pronounced the Fatima apparitions as authentic on October 13,1930 with this declaration by the Bishop of Leiria:

"We deem well: 1) to declare worthy of credence the visions of the shepherds at the Cova da Iria, in the parish of Fatima of this diocese, on the thirteenth day of the months from May to October 1917; 2) to give official permission for the cult of Our Lady of Fatima."

The Secrets as revealed by Sister Lucia in 1942 were:

A vision of the reality of hell, accompanied by this message of Our Lady:
"You have seen hell where the souls of poor sinners go. To save them, God wishes to establish in the world devotion to my Immaculate Heart."

"World War I will end soon. However, if humanity does not stop offending God, another and worse war will break out in the reign of Pius XI. When you see a night illuminated by an unknown light, know that this is the great sign that God gives you, that He is going to punish the world for its crimes by means of war, hunger, persecution of the Church and of the Holy Father. To forestall this, I shall come to ask consecration of Russia to my Immaculate Heart and the communion of reparation on the First Saturdays. If my request is heeded, Russia will be converted, and there will be peace. If not, Russia shall spread her errors throughout the world, promoting wars and persecution of the Church; the good will be martyred, the Holy Father will have much to suffer, various nations will be annihilated; in the end my Immaculate Heart shall triumph. The Holy Father will consecrate Russia to me which will be converted, and some time of peace will be given to the world."

The third secret was only known by the popes after 1960. It was believed to contain apocalyptic predictions and caused much interest by all the Fatima faithful.

On the thirteen of May 2000, the day of the canonization of  the two little shepherds Jacinta and Francisco, Cardinal Angelo Sodano revealed by instructions of the Holy Father John Paul II that the secret was related to the vision of an assassination attempt of a Bishop dressed in white who prays for all the faithful, who was also recently confirmed by Sister Lucia, as being
the Holy Father. As he makes his way with great effort towards the Cross amid the corpses of those who were martyred (Bishops, priests, men and women religious and many lay persons), he too falls to the ground, apparently dead, under a burst of gunfire.

After the assassination attempt of 13 May 1981, it appeared evident to His Holiness Pope John Paul II that it was "a motherly hand which guided the bullet's path", enabling the "dying Pope" to halt "at the threshold of death"

The message of Fatima confirms the maternal love and concern of Our Heavenly Mother, who wishes the salvation of all her children.

"The insistent invitation of Mary Most Holy to penance is nothing but the manifestation of her maternal concern for the fate of the human family, in need of conversion and forgiveness" (Pope John Paul II,
Message for the 1997, World Day of the Sick)

We must propagate the message of Fatima, pray the rosary and to amend our lives. Unless we repent, we will all perish. (John 2:5)

3:9 Who can tell if God will turn, and forgive: and will turn away from his fierce anger, and we shall not perish?

3:10 And God saw their works, that they were turned from their evil way: and God had mercy with regard to the evil which he had said that he would do to them, and he did it not.

The Work of God - Fatima Apparitions