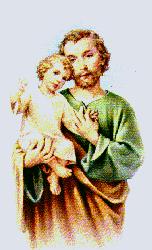 God in His Wisdom chose Joseph a descendant of the house of David to be the most chaste spouse of the Blessed Virgin Mary and the foster father of Our Lord Jesus Christ. Joseph was a just man, who worked as a carpenter to look after Mary and the holy infant Jesus.

When he was promised in marriage to Mary he discovered that She was already pregnant, so to avoid publicity he wanted to divorced her informally but and angel of the Lord appeared to him in a dream and told him that Mary had conceived by the power of the Holy Spirit and that her son was going to be named Jesus, the Messiah, Emmanuel which means God with us.
Joseph followed the advice of the angel, later on took Mary to Bethlehem for the census. They could not find a place to spend the night except for a stable, this is the place where Jesus was born.
After Joseph and Mary presented Jesus in the temple, an angel advised Joseph to flee to Egypt with Mary and her child to be protected from the hatred of Herod. They came back when Herod was dead and at then when Jesus was twelve years old, they lost Jesus for three days but they found him in the temple. Jesus said to Mary and Joseph " Don't you know that I must be in my Father's house?"
Jesus lived with Joseph and Mary, growing in stature and wisdom, obeying them and being a carpenter like his foster father.
Joseph died in the arms of Jesus and Mary that is why he is called the patron of a Happy Death.
His feast is celebrated on the 19th of March. St. Joseph is the patron saint of many religious institutions, He is the patron of the Church, the patron of families, He is the chaste and just man who has great powers of intercession before Jesus his adoptive son and before Mary his spouse.

Wednesday is the special day of the week dedicated to St. Joseph, his devotees are recommended to honor this great saint by some special devotion.

He is that just man, that wise and loyal servant, whom you placed at the head of your family. With a husband's love he cherished Mary the Virgin Mother of God. With fatherly care he watched over Jesus Christ your Son, conceived by the power of the Holy Spirit.

Guardian of virgins and Father, Holy Joseph, to whose faithful care Christ Jesus, innocence itself, and Mary, Virgin of Virgins, were committed: I pray and beseech Thee, by these dear pledges, Jesus and Mary, that free from all uncleanness, and with spotless mind, pure heart and chaste body, you make me ever more chastely familiar with Jesus and Mary, all the days of life. Amen.

Remember us, O Blessed Joseph, and aid us by your powerful intercession with Him who allowed himself to be called your son; make also gracious to us your most Blessed Virgin Spouse, the Mother of Him, who with the Father and the Holy Ghost, lives and reigns for ever and ever. Amen