She was born in 1647 in L'Hautecourt, Burgundy, France, she died on  October 17 1690.
She was healed from a crippling disease during a vision of the Blessed Virgin, who prompted her to give her life to God. After receiving a vision of Jesus after he was scourged, she was moved to join the Order of the Visitation at Paray-le-Monial.

She had great devotion for Jesus in the Blessed Sacrament. Between 1673 and 1675 Our Lord appeared to her during several occasions and revealed the 12 promises for those who practiced a true to devotion to His Sacred Heart, whose crown of thorns represent his sacrifices.

Thanks to the revelations in those promises, Catholics have grown in devotion to the Sacred Heart and they have gained many spiritual rewards through the devotion of the Nine first Fridays. 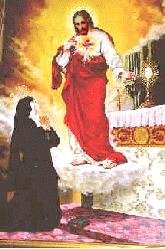 Her heart and brain are still incorrupt.