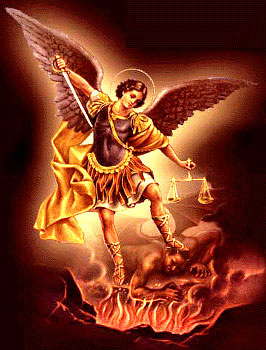 He is the leader of the armies of God, the Archangel that represents the Power of God.

His name means "Who is like unto God ?" When the bad angels rebelled, He was the one who spoke saying those words.

By his humility He defeated Lucifer in this first battle, who was cast down from Heaven.

He is one of the seven spirits that stand before God, prophesied in the Apocalypse to defeat Satan in the final battle between good and evil.

His feast is honoured on the 29 of September.

Prayer to St. Michael the Archangel.

Saint Michael the Archangel, defend us in the hour of battle, be our safeguard against the wickedness and snares of the devil, May God restrain him we humbly pray and do Thou O Prince of the Heavenly Court, by the Power of God cast into hell, satan and all the other evil spirits who roam through the world seeking the ruin of souls. Amen